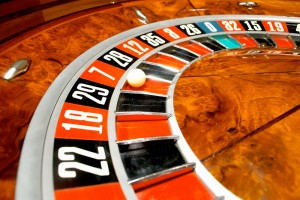 Many popular roulette strategies involve betting on colors and the only difference between them resides in the bankroll management techniques. Don’t let the name of this system deceive you, because you won’t be betting solely on the red without taking any precautions for the situation when the ball lands on the opposite color. The system is designed to keep losses at a minimal level, by hedging against black numbers and the ones located in the first dozen with smaller sized bets.

Each round the player is supposed to bet 25 units, with one of them placed on zero, another five on the first dollars and an additional five on black. So far it doesn’t appear like the strategy is focusing on the red numbers, but players should know that the remaining 12 units are placed on the red numbers belonging to the second and third dozens. Additional two units are split between four lucky numbers belonging to the dozen ranging from 13 to 24, which means that 16-18-19-21 will each have bets of 1 1/2 units.

Naturally, the winnings will be better if one of these four numbers appear, although any other red number belonging to the second and third dozens will result in a profit of 10 units. Basically the player will have 13 numbers covered which amounts for more than a third of the total numbers on the roulette wheel and two side effects of five units meant on covering the risks.

The short video should help beginners set the first wagers, because this is all it takes with a strategy that implies the same amounts to be bet round off third round regardless of outcome. The worst-case scenario is the ball lands on the black number, but not all of them are just as problematic.

For instance, if the ball lands on a black number ranging from 1 to 12, the player will win five units for betting on black and another 10 for betting on the first dozen. These are only the profits which means that overall nothing is lost if any of the aforesaid numbers pop up. Only five units are won if the ball lands on any other black number or on the six red numbers belonging to the first dozen. The risk isn’t negligible, because there is 1 into 2 chances for something like this to happen but the overall loss is of only 10 units.