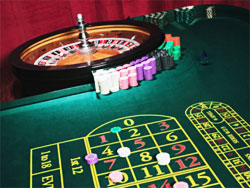 Roulette is one of the oldest Casino games. There are no sure short ways to win at roulette, but by paying attention to some intricate details to the technique of playing roulette, one can definitely increase his chances of winning. Here are a few roulette secrets that may help you in future:

Do not be very certain that what has happened in the past is going to happen in the future in the same manner. After playing roulette for a couple of times, gamblers usually have a belief that they can predict which color would come up the next time. This is a fallacy. Even after several attempts there is always a 50/50 chance of the same color coming up again. This is also known as the Monte Carlo Fallacy.

Another major disbelief that gamblers usually have while playing roulette is that if they keep making the same bet on a particular color, they would somehow increase their chances of winning. What they do not understand is that, if they lose they will have to keep increasing the stake each time. This would result in a higher amount of bets being placed every time which is a very big risk, considering the fact that there are no sure guarantees for you to win the next round. This is known as the Martingale Fallacy.