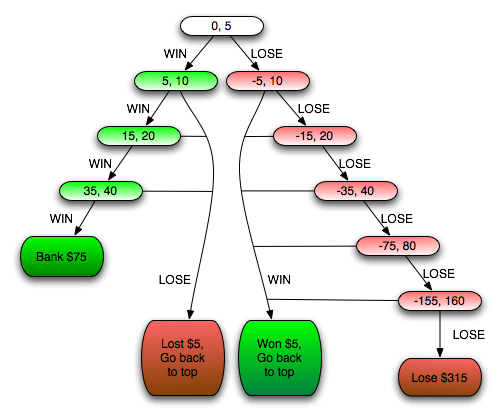 Beating the odds and being a constant winner when playing roulette remains a dream for many players and one that is not wise pursuing at all costs. The simple fact that casinos still offer roulette, means that a definitive way to offset the house edge hasn’t been found. On the flip side, there are a handful of easy roulette strategies that can help players decrease this edge and add a new layer of strategy to a game that is allegedly based on luck alone.

Simplicity at its best with the Oscar Grind strategy

All the player needs to know for using this strategy successfully is to count, because the system states that after winning a betting round the player should increase the wager by one unit. If the winning streak lasts long enough, the amount of money extracted by using this system will be generous, and the eventual lose will still leave the player way ahead. When he loses, the next bet will be of a single unit and the same rule is upheld after every roulette spin that doesn’t generate profit. Losing streaks will be less brutal and players will protect their bankroll during rough sessions.

For even bets use the Parlay strategy

If you are the kind of player that prefers even bets (odds/even, red/black and so on), you will probably love the simplicity and effectiveness of the Parlay strategy. The system works well with other types of bets, but what makes the even ones special is that they usually have the highest roulette limits. When using the Parlay system, players have to wager the profits made in the previous round and the regular stake each time they win. This is why the roulette limit needs to be high enough, so that the cap is not reached too soon. Players need to set limits themselves and stick to them to quit while they are ahead.

Paroli is the opposite Martingale system

In terms of popularity no roulette system surpasses the Martingale, but due to its specific risks savvy players refrain from using it. On the other hand, experienced ones and beginners alike can benefit from the Paroli system which instructs them to double the stakes after winning a round instead of losing. The downside is that you need a winning streak to offset previous loses and if wins and loses alternate, you will not achieve anything with the Paroli strategy. The good thing is that you don’t risk going broke in a single session as you would if the Martingale backfires and you lose many times in a row. Perhaps the most important thing with this strategy is to know when to stop when you win several times in a row.

The author of this roulette strategy chose this name but after explaining it in detail and even recording of video, the shroud of mystery was lifted. While it doesn’t require a lot of money, players are supposed to pay attention to details and watch out for hot and cold numbers. More precisely, the focus is on finding the rows and dozens that had the fewest numbers drawn recently, and focus the bets on them. The bottom line about this strategy is to focus fire on the dozen and the row that is “due”.
In order to do so, one has to notice which were the latest numbers drawn, something that is very easy given the fact that on-line roulettes clearly display them. To get a better view at the roulette board and see how the author chose to bet, check out:
With a minimal effort and a relatively low amount of money, players will pick up the basics right away and start beating leonine roulette.

We don’t try to take credit for other people’s roulette strategies and this is why we let you see what Wayne meant right here:
In a nutshell, players should know that his strategy is very similar to the aforesaid one, as the one betting has to focus on due numbers or colors. Wayne has a more aggressive approach, meaning that he focuses on a single color and also places special bets on individual numbers or clusters. The idea behind this strategy is to win as much as possible when you are on a winning streak, even if this involves taking more chances.