European Roulette: What it is, how to bet and play

Played for centuries and with immense popularity all around the world, it’s not hard to recognize the European Roulette as one of the most famous casino games of all time. Offering many betting options and an easy gameplay, this form of the game has been a staple of casino halls for a long time, and as modern times rolled around, it also gained tons of popularity online. 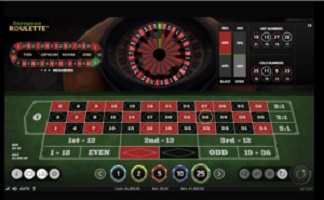 As historians will tell us, roulette as we know it has been played since the 18th century, mostly by French aristocrats. Up until 1843, an old school version of the game was the preferred one, in which the wheel consisted of  38 pockets, enumerated from 1 to 36. The other two pockets were the 0 and the 00. From that year on, the 00 was removed and the 37-pocket wheel established itself as the go-to roulette in Europe. In the US, however, the early version was preserved and the 38-pocket wheel is, to this day, known as the American Roulette. The sequence of the numbers displayed on the wheel also differs from one to the other, but the betting table layout is largely the same.

Although it is played with the same wheel, betting layout and mostly the same rules as the European Roulette, the French Roulette is a form of the game with a couple different twists to it. In American and European roulettes, if the ball lands on zero, all even-money bets are lost. However, in the French game, the player has a chance to recover their money by these two rules. So let’s get those french skills sharp:

En Prison rule: the losing even-money bet remains on the table until the next spin. If it’s a winner on that spin, the player gets the money back.

Le Partage rule: the losing even-money bet is split 50/50 between the player and the house, so only half of the stake is lost.

It’s important to remember that not all casinos play by the same rules, so the player must make sure of them before joining a game.

So, what does this all mean?

As all these different twists and turns are applied to the game, the house gets different edges over the players. With a whopping 5,26% edge, the American Roulette takes the top spot. That’s a huge difference compared to European Roulette, which gives the house an edge of only 2,3%. If the aforementioned Le Partage rule is applied, the edge drops to 1,35%. Since not all casinos play by the french standards, the European Roulette is the preferred version.

Despite multiple systems having been designed to maximize the payout, there’s no consensual top strategy to play roulette. It usually depends on variables like player experience and/or how much one’s willing to bet. However, the Martingale method is quite popular among roulette players. It consists of basically betting on the same result, but doubling the money, due to the approximately 50/50 nature of the bet. This means that in the player’s mind, if the first bet didn’t hit, the second one probably will. Methods like the Fibonacci and Labouchere are also quite common.

The bets in European and French Roulette are vastly similar to the ones in the American Roulette, also being inside and outside bets:

These are the bets made on groups of numbers and are usually preferred by inexperienced players. Due to the higher winning chance, outside bets usually pay less than the inside ones, which are bets on specific numbers.

Red or black (rouge/noir): the color of the pocket the ball will land on. 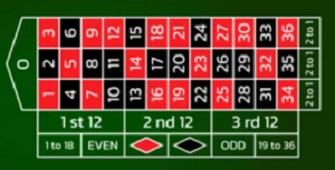 Favorites among long time players, the inside bets are the ones made on specific numbers. Their lower winning chances make the payout higher.

For those who wish to dabble in more complex bets than the standard ones, some French Roulette games let the player make even more combinations. These bets are known as called or announced bets. Here’s what you can do:

Neighbors of zero (Voisins du zero): all numbers between 22 and 25 on the wheel.

Thirds of the wheel ( Le tiers du Cylinder): all numbers opposite zero on the wheel, from 27 to 33.

Zero game (Jue zero): the six numbers either side of zero and the zero itself.

Orphans (Orhpelins): the eight numbers not included in the aforementioned bets.

Roulette spin it from wherever

It was only natural that casino games would eventually fit in the palm of our hands. Online casinos have been gaining traction for years and are probably here to stay. Online gaming platforms can be a safe and comfortable option for those who’d like to have some fun on their luck’s account. And it’s no different with roulette, playing roulette with real money is exciting and full of adrenaline.

Already vastly popular among real casino goers, the European Roulette carried that momentum into the online frenzy and quickly became a fan favorite. Nowadays, players can find multiple websites and apps that offer the game with tons of bonuses and exclusive features, all packed inside cool graphics and intuitive user experience. Some casinos even have live games, broadcasted from a real casino, enhancing the player’s immersion even further. From the casual gambler to the most seasoned one, the internet has something for everyone. 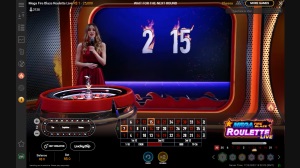 Enjoying the live casino experience is just a few clicks away, and it’s really fun and easy, regardless of the experience of the player. There are just a couple steps one has to take before being able to play.

First of all, the player must choose the preferred website and create an account. It is important to remember that players must be legally of age to play (usually 18 or older). Players must also make sure that they’re picking a safe online casino. One thing they can do is check for the HTTPS (Hyper Text Transfer Protocol Secure) in the website’s address. That’s the system used to guarantee that all data flowing through the site is encrypted, thus ensuring the user’s security and privacy.

Once the account is set, it’s time to make a deposit. Players can oftentimes select a payment method, those being credit card, debit card, PayPal and others. Multiple platforms let the player set a daily, weekly or monthly deposit limit, in order to provide a safe, non-addictive experience.

With money in their account, they’re ready to roll. There are tons of European Roulette game modes that can be played live, with a real live dealer and real live casino players sitting at the table. The player can also interact with the dealer and other players through the live chat.

One thing that sets online and live games apart from the regular ones is the great array of twists and bonuses added to the games. Online casinos offer innovative and creative styles of play, such as lightning roulette, blaze roulette, XL roulette and many more. All these modes feature multipliers and extra rounds that ultimately maximize gains and betting options. Themed games are also pretty common all around the internet, with options such as football roulette, arabic and indian roulette. The games can be played from a desktop or a mobile device and usually do not take a huge toll on the player’s battery charge or internet connection.

Roulette was invented in Europe. It is now one of the most popular gambling games of Europe. So if you want to play European roulette you must be aware of the basic rules of the game.

Unlike its American counterpart the European roulette wheel has a single zero (0) & number 1 through 36. The single 0 wheel increases the players’ chance of winning & reduces the house advantage. Just like any other forms of roulette the croupier turns the wheel & throws in the roulette ball into the wheel. Players place their bets guessing on which number the ball would stop & if their guess is proven right then they win the bet.

The En prison rule is also used in European roulette which only affects the outside bets. According to this rule if zero comes up, your wager is in effect for the next spin of the wheel & if zero is hit again then you lose the bet, you lose your wager but if you hit the bet again then your wager is returned with no further payout.

Check out the casinos below for a chance to win big at European roulette !