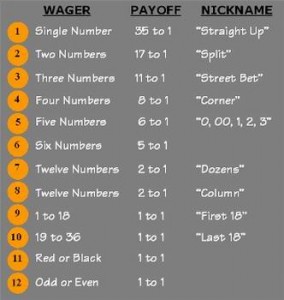 In any game of luck there is a correlation between the chances of winning and the payouts, and players should be aware that ones that are less likely to turn into winners are the most profitable ones. For any reasonable players, who intend to play the roulette in the long run, the goal should be to maximize the income while mitigating the risks. This is why the following article will treat individually all the types of popular roulette bets, presenting the benefits and shortcomings in an unbiased manner.

Those who intend to follow a progressive roulette system, whether it is a positive or a negative one prefer even bets. The reason is that the steps are more simple to follow and the rules are easy to pick up, which also grants more stability to their wagering patterns. The black/red bets, odd/even, or the ones on a range of numbers such as 1 to 18 or 19 to 36 pays 1 to 1 although the chances of actually winning are about 47.4%.

This is the case for American roulette, which has two green numbers on the wheel and the house edge of 5.26%, almost twice as much as the European roulette. The latter has a slightly better probability win by 48.6% for even bets, which explains why it is more profitable to choose this version of roulette. The same goes for betting on the thousands, which are the groups of numbers ranging from 1 to 12, 13 to 24 and 25 to 36 which have a 31.6% probability to win in American roulette and 32.4% in European roulette.

Riskier bets can be more rewarding

If you don’t mind taking slightly higher chances for the prospect of maximizing your winnings, then you should consider these kind of bets. The six lines which just as the name suggests implies betting on six numbers has a 15.8% win rate in American roulette and 16.2% in European one. The chances to win are further decreased if you bet on a corner (four numbers) but the potential profits increase up to 8 times.

Very few are the ones willing to bet solely on a street or a split, meaning that they will place chips on three or two numbers for a chance to win 11 or 17 times the amount invested. The first type of bet has a chance of 8% to turn into profits while the second is just above 5%. Last but not least, there are daredevils who will bet on a straight number hoping to win 35 times more, but the chances are no better than 2.70%.